Dana Perino has a lot of behind-the-scenes stories to tell after her time as White House Press Secretary during the George W Bush administration. She recently revealed the story that touched her the most, and it’s not the reason you think. She writes:

“The president was scheduled to see twenty-five patients at Walter Reed. Many of them had traumatic brain injuries and were in very serious, sometimes critical, condition. Despite getting the best treatment available in the world, we knew that some would not survive.

We started in the intensive care unit. The Chief Naval Officer (CNO) briefed the president on our way into the hospital about the first patient we’d see. He was a young Marine who had been injured when his Humvee was hit by a roadside bomb. After his rescue, he was flown to Landstuhl U.S. Air Force Base in Kaiserslautern, Germany. At his bedside were his parents, wife, and five-year-old son.

After he visited with them for a bit, the president turned to the military aide and said, “Okay, let’s do the presentation.” The wounded soldier was being awarded the Purple Heart, given to troops that suffer wounds in combat.

Everyone stood silently while the military aide in a low and steady voice presented the award. At the end of it, the Marine’s little boy tugged on the president’s jacket and asked, “What’s a Purple Heart?”

The president got down on one knee and pulled the little boy closer to him. He said, “It’s an award for your dad, because he is very brave and courageous, and because he loves his country so much. And I hope you know how much he loves you and your mom, too.”

And then something powerful happened that had everyone in tears:

As he hugged the boy, there was a commotion from the medical staff as they moved toward the bed.

The Marine had just opened his eyes. I could see him from where I stood.

The CNO held the medical team back and said, “Hold on, guys. I think he wants the president…” 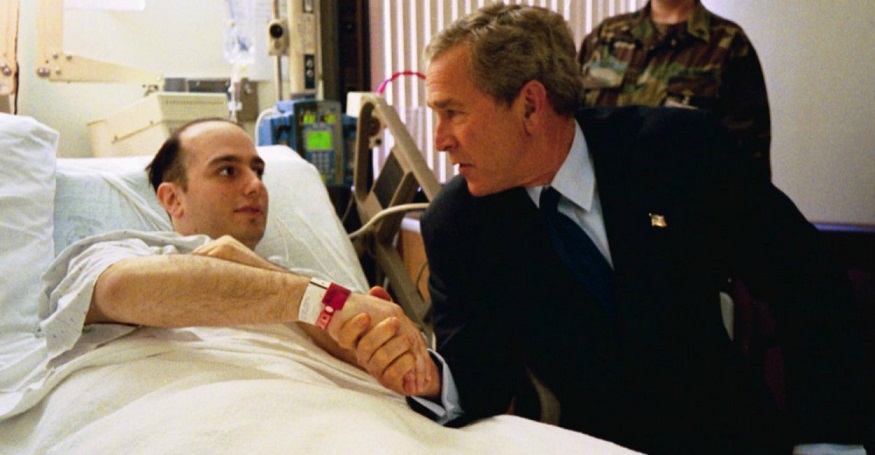 The president jumped up and rushed over to the side of the bed. He cupped the Marine’s face in his hands. They locked eyes, and after a couple of moments the president, without breaking eye contact, said to the military aide, “Read it again.”

So we stood silently as the military aide presented the Marine with the award for a second time. The president had tears dripping from his eyes onto the Marine’s face. As the presentation ended, the president rested his forehead on the Marine’s for a moment.

Now everyone was crying, and for so many reasons: the sacrifice; the pain and suffering; the love of country; the belief in the mission; and the witnessing of a relationship between a soldier and his Commander in Chief that the rest of us could never fully grasp. (In writing this book, I contacted several military aides who helped me track down the name of the Marine. I hoped for news that he had survived. He did not. He died during surgery six days after the president’s visit. He is buried at Arlington Cemetery and is survived by his wife and their three children.)

But there were exceptions.

One mom and dad of a dying soldier from the Caribbean were devastated, the mom beside herself with grief. She yelled at the president, wanting to know why it was her child and not his who lay in that hospital bed.

Her husband tried to calm her and I noticed the president wasn’t in a hurry to leave — he tried offering comfort but then just stood and took it, like he expected and needed to hear the anguish, to try to soak up some of her suffering if he could.

Later as we rode back on Marine One to the White House, no one spoke.

But as the helicopter took off, the president looked at me and said, “That mama sure was mad at me.” Then he turned to look out the window of the helicopter. “And I don’t blame her a bit.”

One tear slipped out the side of his eye and down his face. He didn’t wipe it away, and we flew back to the White House.”