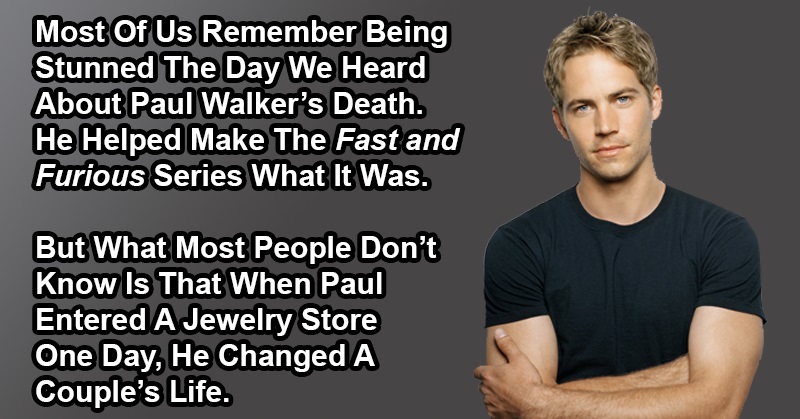 Kyle Upham and his fiancée Kristen were browsing a jewelry store in Santa Barbara in 2004 — just before Kyle was deployed to Iraq for a second tour of duty—when a fellow shopper began to help them with their engagement ring purchase.

“I noticed there was someone else in there, but didn’t give it much thought, and we started looking at rings and whatnot, and he kept saying ‘Go bigger’ and I kept saying, ‘No look at the prices,'” Kyle recalls.

Kristen Upham, who is now married to Kyle, says Kyle began talking with the stranger and realized it was Paul Walker.

After Walker found out that Upham was about to be deployed, he took matters into his own hands. The couple left the store without the $9,000 ring, but a saleswoman called them and told them to come back.

“One of the ladies came out holding a bag and just said, ‘Here’s your ring.’ I think both of our mouths dropped,” Kristen says.

The couple suspected that the gift was Walker’s doing but the employees at the store wouldn’t reveal the gifter. When the jewelry store clerk told her story on CBS Monday, the Upham’s suspicions were confirmed.

“It’s still to this day the most generous thing anyone has ever done for me,” Kristen says.