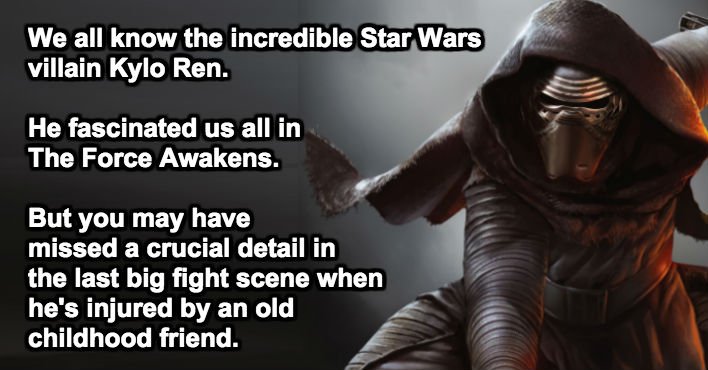 We need to talk about Kylo Ren’s wound.

At first, pounding on the gash in his side seems like a strange thing to do. Then, you remember: the Dark Side of the Force is fueled by rage and pain. He is hitting his injury to make himself stronger. It’s a survival tactic that probably prevented his body from undergoing shock. It’s what kept him alive.

Not so fast. There’ s more.

Have you stopped to think about who shot him? Chewbacca.

Chewbacca, who probably would have been the equivalent of Ben’s godfather. “Uncle” Chewie.

Who would have patiently allowed infant Ben to tug and pull on his fur.

Who would have taught him to speak Wookie, and let him play in the Millennium Falcon, even when Han said to cut it out.

Who would have shown him that family and love come in all shapes and sizes. It was Chewbacca that shot him. Because Ben betrayed him.

He is no longer Ben Solo, but Kylo Ren “Victorious Ruler.” This man is not the boy Chewie knew. And he just murdered Han Solo. The shot was based on an instinct. A gut reaction. And right after it was fired, you can see the pain in both of their faces.

The wound was inflicted by Kylo’s former friend, but it’s cause was his own action. The act that was meant to help him. The act that should have pushed him over the edge and into complete darkness. Kylo Ren’s last resort to resisting the call to the light.

Go back to him pounding his wound. Why was he hitting his injury? He was bleeding out, after all. Blasts from the same weapon have taken down armored stormtroopers. Simple. It didn’t work. Killing Han Solo did not help Kylo Ren achieve darkness. If anything, it weakened him. By hitting his wounds, he’s not just inflicting physical pain, but the pain of every part of his injury: the death, the shot, and his failure. He’s hitting himself to relive that pain. But, after everything he is still drawn to the light.

Rey. “You need a teacher,” he tells her. “I can show you the ways of the force.” But that’s another story.

Do you agree with this? Share this with your friends today!