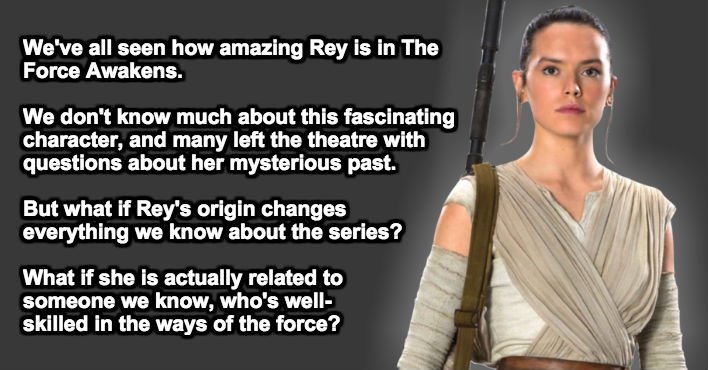 But wouldn’t this be too easy, it wouldn’t have much of an x-factor effect on us in the next film.

What if she is Obi Wan Kenobi’s granddaughter?

She has the accent. No one else in the movie, but Obi Wan and Rey have British accents. Remember that both Liam Neeson and John Boyega, both British actors, performed with American accents.

Obi Wan uses Jedi mind tricks in both the prequels and the OT, this is one of his signature abilities. Like Obi Wan, Rey uses mind tricks on the Stormtrooper JB-007.

Like Obi Wan sneaking around the Death Star and disabling the tractor beam, Rey does the same in Starkiller Base. Are we getting some breadcrumbs leading to answers about Rey?

Rey even has a costume similar to Obi Wan’s (in the Prequels).

Both the old (Ewan McGregor) and the older (Alec Guinness) voices appear in the basement where Rey gets the lightsaber (flashback scene). If she was a Skywalker wouldn’t Anakin’s voice be heard too? If she was Kenobi’s daughter it would certainly be furthering an Obi Wan plot twist between episode 3 and 4… YAY

So remember that Rey finds Luke’s lightsaber in a wooden chest. But Obi Wan had it for 20-30 years and then he presented it to Luke from a wooden chest. In Episode 4, there is misdirection as to whom Luke’s father is, similar to Episode 7 about Rey. So to my point, think about how much more poignant Episode 7’s final scene of Rey handing Luke his own lightsaber becomes if it’s once again a Kenobi reuniting a Skywalker with their weapon, compelling them back to the fight. Of course we all know that the burden of the lightsaber is now Rey’s whether she wants it or not.

There’s a reversal of the mentors. In episode 3 we have Obi Wan hiding Luke from Darth Vader, what if we had Luke hiding Rey from Kylo as soon he heard of the Jedi massacre. It would also be an emotional reversal of the role – Kenobi trained Skywalker, now a Skywalker training a Kenobi.

Besides that, we know very little about Obi Wan, other than from Episode 1, 2 and 3. But if I do remember correctly, after Episode 3, both Yoda and Obi Wan realized that the ways in training the Jedi was old. Points from the RotS novel:

Qui Gon,”Do not blame yourself, my old friend.”

Yoda,”Too old, I was. Too arrogant to see that the old way is not the only way. These Jedi, I trained to become the Jedi who had trained me, long centuries ago–but those ancient Jedi, of a different time they were. Changed, has the galaxy. Changed, the Order did not, because let it change, I did not.”

Yoda realizes that the Jedi are powerless against the Sith because the Sith have changed and evolved over the ages while the Jedi have become complacent and set in their ways. So instead of training Luke and Leia to become Jedi from birth as the Jedi have traditionally done, Yoda decides it’s time for a change and believes that the twins should be raised by parents who love them and not be trained as Jedi until they become adults. So maybe Obi Wan had a little adventure or two between Episode 3 and 4. I would certainly love a film about him.

So assuming that Rey isn’t just the hero, but also the character that ultimately brings “balance to the force,” the revelation that Rey is a Kenobi and not a Skywalker would twist the entire nine episode arc. We were told at many points in the prequels that Anakin Skywalker was “the chosen one.” Not only was this false, but in Episode 7 we learned that Luke has also failed in his attempt to bring peace to the galaxy. Luke’s Jedi training of Ben Solo – a Skywalker – was clearly such a disaster that it turned him to the dark side. In all, the Skywalkers are a pretty mixed bag: Powerful, but emotional, petulant and frequently tempted by the allure of evil. It’s Ben Kenobi, in the earlier episodes who is truly virtuous, noble and pure of heart. He’s our true hero. He’s incorruptible. He sacrifices himself at the end of A New Hope to show Luke the power of faith in the force, saving him and the galaxy in the process. Wouldn’t it then make complete narrative sense for a Kenobi (Rey) to be the true hero of the saga — perhaps even saving the soul of another conflicted Skywalker (Ben Solo/Kylo Ren) later in the new trilogy? How satisfying would it be to learn that the nine episode arc is really, underneath it all, about the Kenobi family and not the Skywalkers?

My favourite moment in the series comes in Episode 5 when Luke has abruptly and hastily cut short his training, and Force Ghost Obi Wan laments, “That boy is our last hope.” Yoda replies, “No…there is another…” Written originally to be a reference to Leia, how dramatic would it be for the “another” to ultimately mean a Kenobi? After all, we do learn pretty quickly in Episode 7 that Leia never becomes a Jedi. If Rey is a Kenobi and if by the close of Episode 9 she’s brought “balance to the force,” then all of the previous movies take on a new meaning. Even Obi Wan’s Force Ghost from Episodes 5 and 6 takes on a much more spiritual purpose than to just provide convenient story exposition. If Rey is revealed as a Kenobi, it changes the entire paradigm of the series.