So you’ve heard of J.K. Rowling right? Just one of the world’s most successful writers and the richest woman in England? You might think someone with such great success has probably always been successful but she proves this is not the case.

She says that one of the reasons she’s so successful isn’t just because she’s talented but because she was too stubborn to give up, and she posted proof to show that she didn’t always have it easy, and that writers should never give up.

When she received a message from a fan talking about keeping getting rejected, Rowling shared that she keeps all her rejection letters as her own early failures motivate her:

She said that her Harry Potter rejection letters were stowed away in her attic, but rejection letters for work under her pen name, Robert Galbraith, were easier to get to. So she posted those bad boys to Twitter. 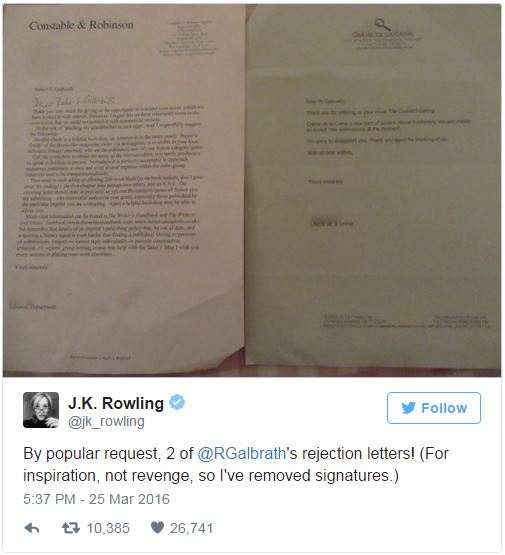 One of the letters was your typical short-form Dear John, whereas the other said it couldn’t publish her novel with “commercial success,” and even offered up some eye-rolling tips like writing an “alluring blurb” and to take a look at “the Writers’ and Artists’ Yearbook.” Uhh… yeah, sure.

Rowling continued to talk about how each rejection affected her and that even though she was dead-set on submitting to every publisher, she was still doubtful each time.

She revealed that even after the success of Harry Potter, publishers were still turning her down – TWICE in fact!

Finally, one user asked her how to get the courage to risk it all for the things that she loves when she doesn’t have enough of a support system if all fails?

So don’t procrastinate, people, get to it. Not yesterday, not tomorrow, but today! Mama J.K. said it herself. She went for broke, and she looks like she’s doing all right.

We hope this motivates you in your work, studies and life. Share this with your friends and spread the motivation!