I thought I knew true love but this changed everything. For the past 20 years, a man named Roque ‘Rocky’ Abalsamo did something every single day that is simply heart shattering. In 1993, his wife, Julia ‘Julita’ Echeverria, sadly passed away after 35 years of a wonderful and happy marriage. Ever since that sad day, Rocky has sat by her grave in St. Joseph Cemetery in Boston, MA. He didn’t eat or drink. All Rocky did was withstand the scorching heat, heavy rains, bitter cold and snow to be by his wife’s side.

Rocky and Julita met in in their native Buenos Aires during the 1930’s. They were in a cafe with their backs to each other and Rocky simply heard Julita talking to her friends about the soul, life and goodness – at that moment, Rocky realized that he needed to know the person he heard, a woman full of so much love and passion. Since that moment, the two have been inseperable. They lived a happy life together, marrying in the spring after they had met. They had two children and they moved to the United States in 1971.

They had been married for 35 years when Julita needed sudden heart surgery. After the surgery, Julita sadly passed away due to complications. Rocky’s world was turned upside down without her and heneeded to be close to his wife. So he began his daily vigil next to Julita’s grave that would last for more than two decades. 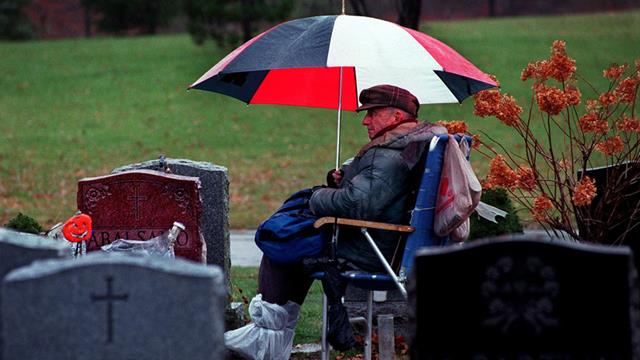 Rocky didn’t do this for fame or attention but he became a local celebrity after The Boston Globe wrote a story about him. He had visitors at the cemetery who would bring him clothes or food. Sometimes, they would even just stop to talk and keep Rocky company. No matter how long the visit was, everyone who met him was moved by the deep love he had for his wife.

Sadly, Rocky died on January 22nd after fighting an illness for 6 months. He was 97 years old. Although his family will dearly miss him, one thing is entirely clear: after more than 20 years, he and Julita are now finally reunited.

Share this touching story of Rocky’s unending love with others.