Lizzie Velasquez doesn’t just look different. She is different. And that’s why she’s able to something that hardly any of us can. 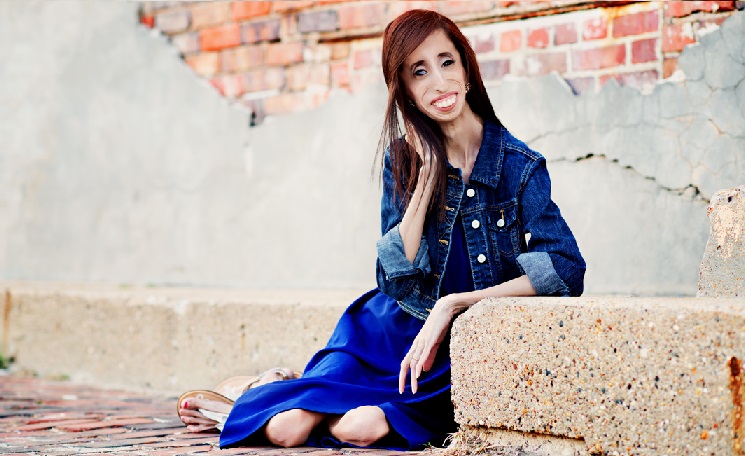 Lizzie was born with two rare conditions: Marfan syndrome and Lipodystrophy – this means she’s not able to gain weight no matter what she eats. At 26 years old, she weighed only 60lbs or 27kg. Her condition left her blind in one eye, she’s visually impaired in the other. But there came a point that changed everything for her.

At age 17, Lizzie stumbled upon a video on YouTube of herself with the title: ‘The World’s Ugliest Woman’. The video went viral almost instantly.

‘I was shocked,’ Lizzie recalls, ‘but it wasn’t until I started to read the comments that my stomach really sank.’ The comments included:

“Why would her parents keep her?!”

“KILL it with fire”

“Who would want to get married to THAT?”

Understandably, Lizzie was devastated and cried for many, many days and nights. ‘When I was a teenager I would look in the mirror and wish I could wash away my syndrome,’ she says. ‘I hated it because it caused so much pain in my life. Being a young girl who is constantly picked on is unbearable.’

However, she decided to make a change. The words and actions that hurt her became her motivation to keep going. She made her own YouTube Channel and built a career as a motivational speaker teaching others to be confident about themselves. Her TED talk entitled ‘How do you define yourself?’ has almost 8 million views right now and growing.

She also managed to achieve one of her main life aims by getting engaged! Her loving boyfriend surprised her with a romantic proposal and she said yes!

We really recommend you hear her speak and tell her story. I’m stunned.

Recently, she left people in awe once again. Her story was made into a movie and hit the big screen. It’s called “Brave Heart: The Lizzie Velasquez Story.” The director of the film Sara Hirsh Bordo says that ‘it is not only about Velasquez’s story but for everyone who has been bullied.’

You can watch the amazing trailer here:

Lizzie really defines herself by her tenacity and incredible strength, she is the epitome of what real beauty is. Major respect to her and we wish her all the best.

If you are inspired by Lizzie’s story, please share this to your friends and family.